Working with ponies and horses is pretty simple, it had to be, pretty much everyone used to do it. Deliveries, mining, docks, agriculture, railway shunting, factory machinery, it was all horsepowered, and operated by the cheapest labour, frequently child labour, that  the bosses could find. So you can forget all the “horsey” background nonsense..
This is horsemanship for people who just want to do things with horses and ponies. It is a system for enjoying them, being safe with them and getting them to work with you, and it is a three stage process. 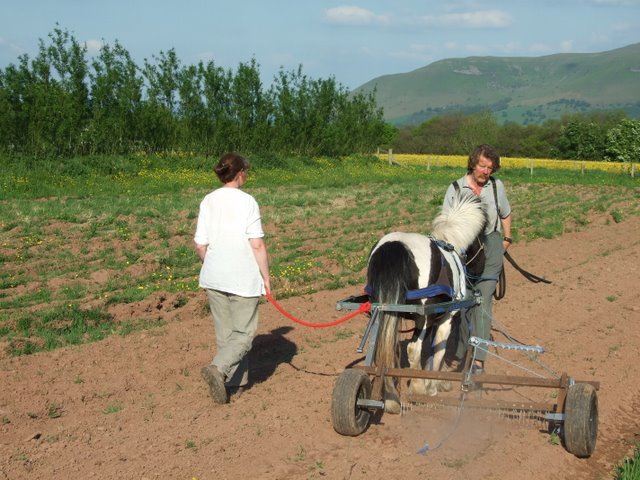 Since this is aimed at those who have  never touched a pony, I assume you are going to start with a pony that is used to people and can be caught and handled. if you have never handled a pony, starting with a completely green pony, or one that is scared of people, is a challenging prospect, and I am not going to tell you how to do it.
So you have a pony that you can approach and talk to, in a safe secure enclosure, great. Now for stage one.
Be nice to it.
Feed it.
Scratch it.
Rub it.
Massage it.
And guess what, if you do things it likes, it will come to you.
Patricia Barlow Irick’s blog on making friends with mustangs gives loads of ideas for how to make friends with scared wild animals. It works with them, it will be really easy with a tame pony. So get out there and make friends.

Friends have an  instant mathematical advantage to the pony,  which is why it is so easy to make friends with a pony.  A pony on its own, that meets  a predator, is the prey. If there are two ponies,  each will only have a 50% chance of being the prey. So friends are vital.
The Natural Horsemanship concept of sending a horse away isn’t kind. It may not be physically violent, but the message to the horse is frighteningly clear.
“Die!
You are on your own, when a predator arrives, and it will, you, and you alone, are the prey!”
No wonder they want to join up. Death is the alternative.
Friendship is just another way of looking at the problem. Rather than threatening a solitary and terrifying death, you offer friendship and a 50/50 chance.  The scenario is the  same because the pony is still terrified by his ancestral fears.
With friendship, rather than threaten danger, you offer safety.

Don’t carry weapons.
It is really dumb to have to make this point. There is no other animal where you have to beg people not to arm themselves. Lion tamers haven’t used whips and chairs for years. Army dog trainers, and even civilian guard dog trainers don’t use weapons, and they aren’t at the cuddly end of animal training.
So please, please, please, don’t use whips, don’t use spurs, don’t use bits and try not to kick the poor animal.
I assure you it is much easier to make friends with animals if you don’t approach them armed to the teeth. Strange I know, but true

Don’t use violence.
Gerbil and Hamster training manuals assume you won’t lay into your pets, so why do horse training manuals go overboard on discipline and showing the poor beast who is boss.
I have been told endlessly (by horsey people)  that i have to hit Obama for biting me. Now there is some logic in retaliation, so I give him a carrot or a scratch. Occasionally I shout, and sometimes I apologise. All these are forms of communication which make appropriate “retaliation” for Obama’s communication.
I watched Nick Sanders’ two stallions, Kevin and Ollie, endlessly squabbling with each other, snaking their heads at each other with teeth bared, and almost always failing to connect. Even when they did, there was no squealing in pain. A nip that would have me demanding an ambulance at least, is shrugged off by them as just communication, a prod in the shoulder..
Violence may be a valid response to violence, but most nips are communication attempts. Do you hit people asking you questions? And that is the joy of the internet, I can ask that question and even if your natural response to questions is to clock me one, I’m safe behind my keyboard.
I used to smack when nipped, because I saw it as legitimate retaliation, but one day, developing the row crop system at Ian and Theresa’s Beacons veggie box farm, Obama chomped really hard on my wrist and wouldn’t let go.
I punched him hard on the cheekbone, which pigging well hurt me, and he let go looking mildly offended. I found myself looking at what I was actually doing. I had hooked him up to piece of complex experimental equipment which needed at least two people to operate, on my own, in a vile mood, in driving rain, having just hauled him out of a field where his latest girlfriend was in season, and not surprisingly it wasn’t working properly. So Obama bit me.
The message was clear. This is stupid, and it will all end in tears.
Once I stood back and looked at what I was doing, I dug out a carrot and gave it to Obama, left the equipment to get wet, and took Obama back to his girlfriend.. From then on the carrot/carrot principle was born.
Whatever they do give them a carrot.

Don’t deliberately frighten the pony.
Because I wanted a system that I could take into inner cities with a pony, and use with anyone, it had to be simple, and it had to be fair. So no weapons, no violence, that is easy to explain. But lots of things can frighten ponies. Umbrellas, amplified music, cows, fountains and motorbikes have all terrified Obama on occasion.
I want people to be able to enjoy Obama, and any pony, so all I ask is that they don’t DELIBERATELY frighten a pony. You do something that frightens him, don’t repeat it. Though once he has calmed down, we might work together to get rid of the fear. But with no weapons, no violence, no deliberate frightening , I can let anyone play with Obama.
And since people like ponies, and ponies like people, this is a system that lets them get together.

Leadership is a trade off, I take the risks, I pick the direction. But it gives the leader power. I decide when we move and where to, but not by forcing the follower, it’s just that if he doesn’t follow he’s on his own. But then so am I.

Leadership is positional. You lead from in front and from nowhere else. Check with any soldier. The leader is the guy who goes over the top, into the building, out of the plane, across the minefield………..FIRST .
Someone standing behind you, telling you to do it is a politician or a General.
You want to lead, well you go first.
Unlike soldiering, leading ponies is really pretty safe and pretty easy. The ponies primary fear is of large predators lying in wait to eat them. I don’t know your neighbourhood, but the number of lions, wolves and hunting dogs in and around Exeter is pretty small. That doesn’t mean it is safe, it means that the fears that Obama has inherited, are unlikely to be fulfilled.

Leadership isn’t about dominance. Leadership is a two way process. You follow my lead, so I get the choice, and I get the first mouthful of anything really lush, but you get the knowledge that in any ambush, I am lunch and you are safe.
That is the trade off. The power comes from the leader being prepared to set off on its own. That may be because it is older and came this way last year and knows that there is good grazing the other side of a band of trees. The band of trees probably contains predators, but the grazing is very lush. These are the decision processes that are involved in the day to day leadership questions.
I can lead today, and you can lead tomorrow. But the fact remains, the first one into a potential ambush is dead, the folower gets to run away..
That is the risk the leader takes. That is why the SAFE option is to follow. Being left on your own is even more dangerous. Ponies are  herd animals, and prey species. Their defence is in numbers, and speed.
As a side effect, if you lead often enough, and you are right, and manage to avoid all the lions in Exeter over a few months, your pony decides you are worthy of respect as a leader. This is the basis of the GODMOTHER relationship.

Leadership is walking in front. Er…….that’s it.
Try it, and once your pony has followed you somewhere, next time he won’t be frightened of that route, or maybe it will take two attempts, or three…………..or seventeen. But is that really so much to ask to get a pony that will go anywhere you want? 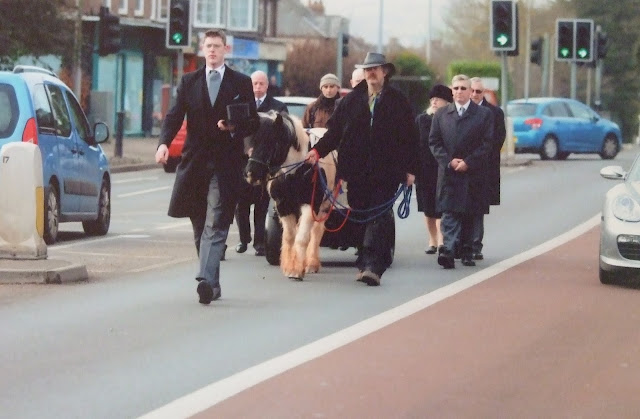 But as you lead into stranger and stranger areas, your pony comes to depend on your judgement more and more. They love variety, they love new places, but new places and variety scare them. Temple Grandin uses the phrase “curiously afraid” to sum up the issue.
That curiously afraid status is the perfect training tool. As your pony moves closer, seeking reassurance, you can go from leader, ie the one who is in front today, to GODMOTHER. The one who is always right, always there, always ready to defend you, to the death if necessary, and always asks you to tidy your room.
Next we look at the GODMOTHER concept.

Any horse or pony training system based on talking horse language so you can be the boss horse, is doomed to failure. For a start, do you really want all the mares to yourself and the very best bits of grass. If you do, carry on. I want my pony and I to be able to enjoy ourselves in reasonable safety, unless we choose to do something terminally stupid like galloping across unknown rough ground with a chariot, when I want my pony to be safe, and I rather hope to get away with just bad bruising.
Obama knows I’m not a horse. Not enough legs. Extensive research has been conducted on this issue by P Cook et al
Follow link to research.

The lack of wiggly ears is another major problem, and you stink of houses and make really silly noises.
However these defects in a horse, are perfectly acceptable in a God. God’s get away with behaviour that would have you flung out of the House of Lords, there are things even they find unacceptable, and you only have to look at Hindu temples to see that mathematical relationships between body parts aren’t too closely followed.
And the Great Spaghetti Monster, in his Pastoral capacity as the acknowledged Deity of us Pastafarians, has more appendages than you can shake a stick at. If we can believe in the Great Spaghetti  Monster, I am sure you can persuade your pony or horse to accept you as omniscient, etc.
Then, you too can achieve the status of GODMOTHER.
There is only one minor problem. You will have to be sincere. And that means that the safety and well being of your pony MUST come first. If it does, he will believe in you.

The GODMOTHER concept works. I have been taking Obama into some really silly situations of late, and  although frightened, he doesn’t panic. The main problem is persuading him to get out from under my waistcoat which is where he feels safe. This is based on Tmeple Grandin’s wok and that of Jaak Pranksepp, and more detailed explanations will follow.