Obama and Lions don’t get on. This shouldn’t come as much of a surprise, but then again, it shouldn’t be much of a problem. Obama and I started working together in Wales, and slowly migrated to England, neither country having an obvious lion problem. But then I am not a pony. Obama is, and takes a very different view. 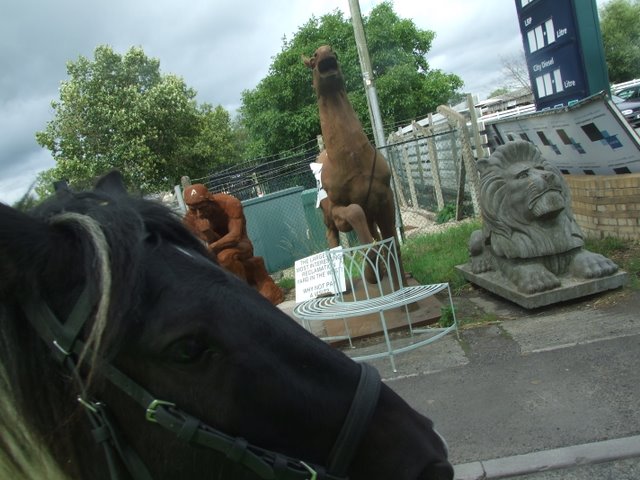 The first lion I noticed was on the road from Glastonbury to Rode, (that has to be a song title), the first stage of my Exeter to London, wheelchair enabled vehicle trip. We came round a bend to be faced by Rodin’s “Thinker”, a rearing horse and a huge lion. Obama freaked out. At the time I wasn’t too sure whether this was because his artistic sensibilities had been outraged, a reaction to a rearing horse or fear of lions. Given the traffic on the road to Rode, and the stresses of the journey, I took a couple of photos and moved on to somewhere that Obama felt safe.

But I digress. I made it to London without seeing any other lions. Obama would beg to differ, but I didn’t see any lions. 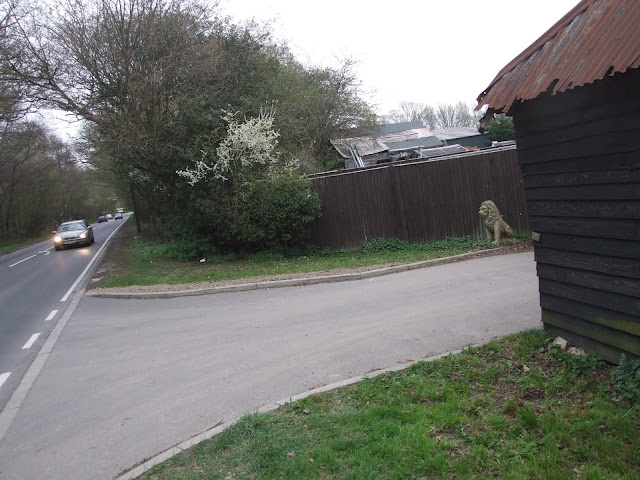 The next lion I noticed was this spring, driving on the A272 between Newick and Piltdown, a road that only the stupid take pony drawn vehicles along. I approached the crest of the hill on the right hand side of the road, with me leading Obama from the left, and providing a human shield from the traffic. I consider this the safest way to lead on insanely busy high speed roads with no verge or footpath. If you are leading on the correct side of the road, you are permanently looking over your shoulder to assess the risks, which does nothing for the pony’s confidence. Facing the traffic, you can see the idiots, and can step further into the road to persuade them to slow down. My policy is simple, if you want to drive a car into my pony, you have to go through me first.

My attention was forwards to the traffic, but Obama was keeping his eye out for danger, and as we approached a driveway, he saw a lion, and freaked. This time I know it was the lion because there weren’t any “Thinkers” or rearing horses, just a gravel drive and a stone lion. Obama was terrified and I had to take him across the road to get him past the offending lion. I came back later to take the photos, it just wasn’t an option at the time. 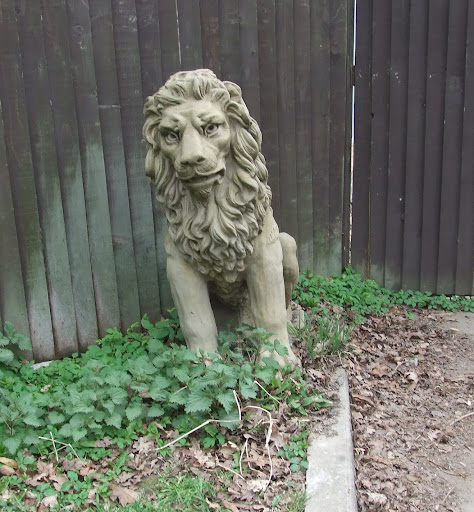 The third lion that I noticed, again, please note this is my lion scoring system, not Obama’s, was in Exeter on the playing fields. This is a regular route of ours, so I know the usual lion population is zero but Obama again totally freaked. The “lion” was a pile of, admittedly lion coloured, lawn mowings, with a branch lying on the ground behind them. I do have a photo, or did till my computer crashed, showing a pile of lawnmowings and a branch that with a lot of effort can be seen as a lion’s head with the branch making some very unconvincing ears. 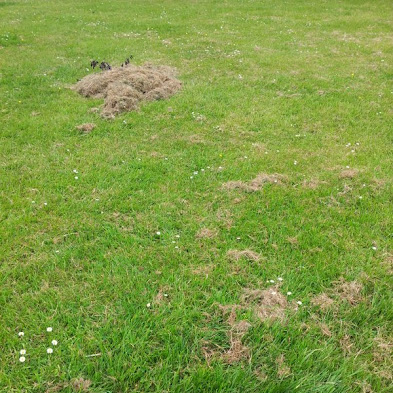 However if I am honest, the photo very clearly shows a pile of lawnmowings and a branch, and only with prompting will you see a lion’s head. But that is the whole point. Ponies are a prey species. Horses are just over grown domesticated ponies so we can ignore them, but ponies evolved over millennia from animals that survived to breed because they could identify a predator, even when it was hiding.

I believe that most problems with discipline, outside the school, come from the pony’s belief there is a lion ahead, and the rider’s conviction that the animal is naughty, or lazy, or napping, a disgusting word which is used to justify pointless abuse. From my, and Obama’s experience with lions, I believe that prey species have an innate predator identification mechanism, that cuts in above a specific probability of as predator. I believe humans are brilliant at recognising their own name in a document, ie your name has a shape that is particularly identifiable to you. It is far more important for a prey species to recognise a predator, than it is for you to recognise your name. 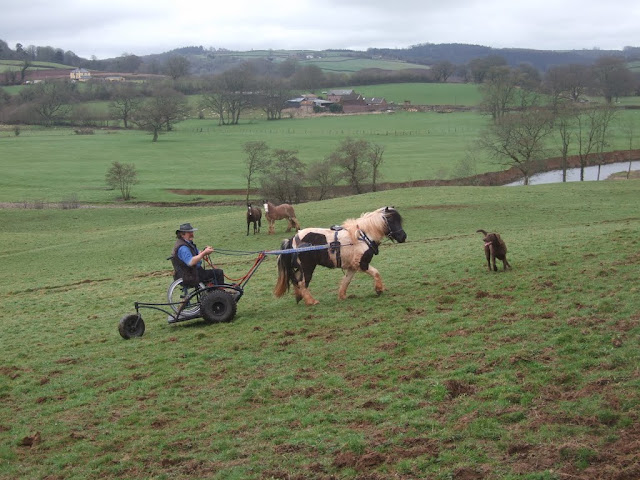 My final lion belongs to John Bunce, his Chesapeake Bay retriever. I was over at John’s just seeing if Obama was going to co-operate driving round John’s field. He had been there before and driven with John’s big Clydesdale and a mildly loopy thoroughbred in the same field, and John’s Chesapeake had chased Obama and Obama had returned the compliment.

This time, the field was awash with buttercups, chest high on a Chesapeake, and the dog was lugging a huge log around in his jaws. Obama saw a huge head and oddly sinuous body racing through the buttercups and went straight into terror mode. I pulled the ripcord, leaped out of the iBex and only just managed to keep control of Obama who was circling me at speed, eyes on stalks, ears rigid.

Once a friend had caught the dog, I put Obama back in the iBex and gave it another try. Unfortunately the dog got loose again, with identical results. So we took a half hour break and I got John Bunce to drive Obama and the iBex, on the road, with the dog. No problems. Obama isn’t scared of dogs, he isn’t scared of much, but in high buttercups, a big dog looks weird, and mildly lionlike. 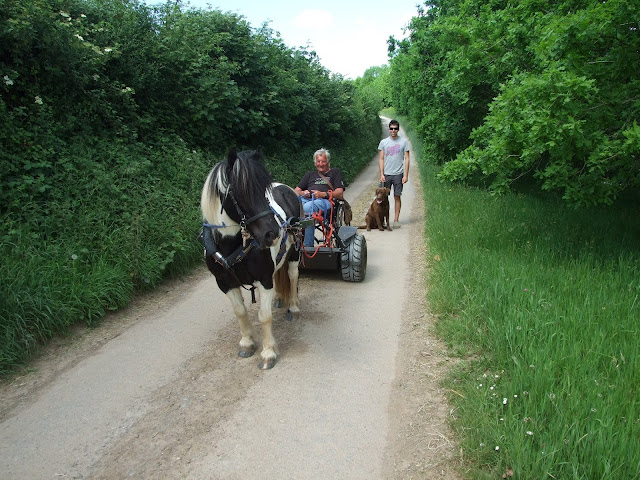 I don’t think we should all be trying to spot the lion, for a start, we don’t respond to the same visual clues. If we did, Simon Mulholland would have you all going “Wow, I recognise that name! That’s me.” We need to accept that although we can’t see the lions, our ponies can. What riders call “napping” is fear. The cure for fear is reassurance and leadership. And leadership, as I say endlessly, is positional. Lead the animal. That is all it wants. You between it and danger.

I specify outside a school, mostly because I never work animals in a school if I can possibly avoid it, and because in schools the major problem is boredom, unless your school has an unusually high lion count. Even then, a slowly turning fan, or a sound system may trigger the fear mechanism.

The essential point is that fear is an innate part of a prey species survival mechanism. It is normal, and good. If you punish the normal and good, kicking the poor animal on, whipping it and hauling its head around, you won’t get the normal and good, you will get the abnormal and bad, and it will be entirely your own fault, or the fault of the person who told you to kick or hit a scared animal.