I was pretty impressed with my first shot with a bow and arrow from a Saddlechariot with Obama in the shafts. I hit, first time, the field I was aiming at. How cool is that?

Years ago I had a chariot archery session with Henry and Julian Midder. Julian is a seriously good horseman and re-enactment freak, so chariot archery seemed a natural idea. Henry is really laid back and unfussed by almost anything other than drum machines in discos and helicopters landing so I wasn’t worried that he would be awkward.

I asked Julian to show me how a bow and arrow works, always a good idea before you set off to try chariot archery, so he took the bow, nocked an arrow and drew. Henry took one look and disappeared to the far side of the field. I know a few clay pigeon shooters and they have the same killer look when limbering up to shoot that Julian has with a bow and arrow. A total focus on the target. Henry could see that Julian, a man who had sorted out Henry’s back problem earlier in the day, had turned from a nice, kind, gentle horseman into a serious predator, and Henry knows that predators see ponies as lunch. So he sugared off. If I wanted to hang around a predator that was my problem. 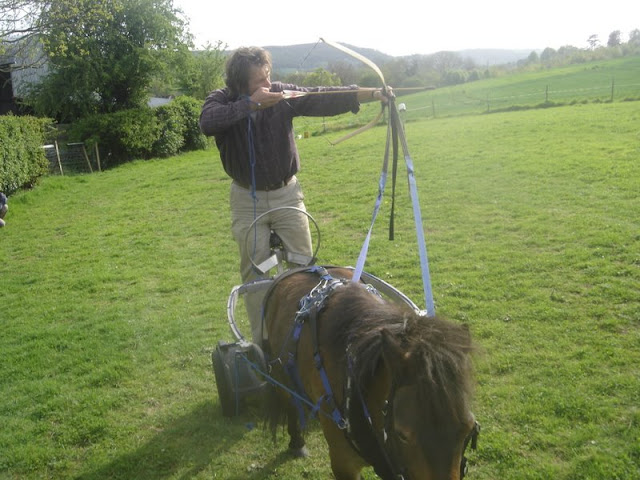 It probably took half an hour to persuade Henry that he wasn’t lunch, and then he co-operated and let us both demonstrate our skills, or lack thereof. For some reason I never followed up the chariot archery idea, partly I knew it was possible, and I like doing the things I know I can’t do, and partly I didn’t have a friendly archer nearer home. 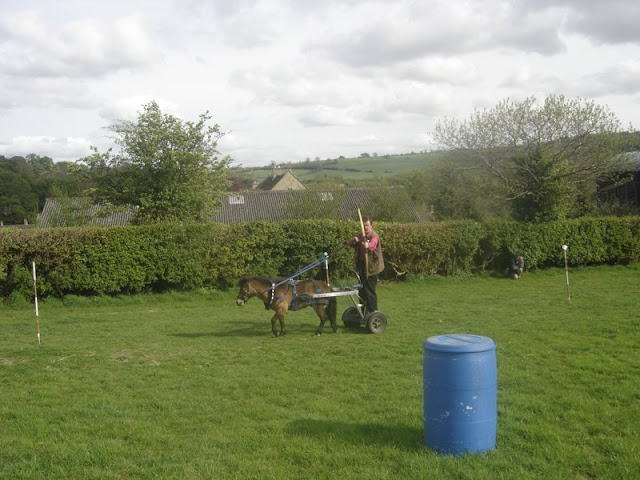 When I got Obama, I didn’t think of archery early on, which was lucky because Obama and stick shaped objects isn’t a good combination. Once I realised the extent to which he hated sticks, I didn’t contemplate archery because I wasn’t sure it was possible without seriously upsetting him. I said earlier I like doing the impossible, but not when Obama does the paying.

I was so chuffed about hitting the target first time shooting off an Obama powered chariot because Obama hardly batted an eyelid. He wasn’t relaxed, but the firing of the bow isn’t the big problem, nor is the arrow going past him. The problem remains the fact that someone is standing behind him with a stick.

Obama is congenitally lazy, but so am I so I can hardly complain. He slobs along most of the time, but he brightens up on new terrain and large areas of grass. I know his normal speeds on all the routes round his homebase, and when we start doing the routes in half the time, there has to be a cause. If I carry the bow, I can halve the journey time, and boy when I think of the times I have stood in driving rain, while Obama mooches home at a pace that suits him, carrying a bow to speed him up would be heaven. Which is why I don’t carry a stick, and why, I am spending all my time with a bow, trying to slow him down to a mooch.

I would love him to go faster, but I want him to want to go faster. Not have the bow scaring him into going faster. I am careful to leave actually firing the bow till near the end of a drive so I can see whether firing the bow increases his speed at all. As far as I can see it doesn’t. When I get him back to his field, I take the bow and arrow and after releasing him, fir arrows and feed him treats. He stands around pigging himself while I practice, but if I run out of grassnuts and fire an arrow he is off claiming to be terrified.

I hope I can persuade Obama to provide field archery for those in wheelchairs, or with limited mobility, and for those who just think chariot archery is cool, but I have to get him to accept the bow as completely non threatening. I scratch him with it incessantly, and take it from my right shoulder, spinning it to shoot left handed, ie holding the bow in my right hand, then flipping it to my left hand to shoot right handed without dropping the reins or the instant release or the arrow. Obama seems to accept that my focus is off the side. With Julian and Henry the problem was that Henry was standing sufficiently in front of us, for Julian’s predatory pose to be a real threat.

The great benefit of chariot archery is that it does wonders for your chariot driving, mostly because you have so much to thinkl about that you tend to let the pony and chariot get on with their stuff. This becomes interesting because Obama has decided his feet are tender, and that he prefers the verge. The verge where I am driving and practicing bow handling is rarely more than 30 inches wide so when Obama has both feet on the verge the saddlechariot floor is at an angle and the wheel is maybe an inch outside the hedge.

Drainage ditches and treestumps add regular excitement as we hit them at speed. This improves my balance no end, and I am beginning to feel pretty confident that when Obama is back to relaxed mode, I will be really confident driving without bothering to look at the terrain and concentrating on the target. It also means I am going to have to teach him to understand verbal commands for direction and speed as I try to concentrate on keeping my aim.

The final benefit is learning again what fun the Saddlechariot is. I have been concentrating almost exclusively on the iBex, and driving the FloppyDrive for light relief. The FloppyDrive is an aberration. I build safe vehicles. I am proud of building safe vehicles. The FloppyDrive is a modified Saddlechariot and seriously dangerous. It has only one virtue, that you can drive it diagonally across tractor ruts, flat out, without it hurting. But I crash it about every third time I go out. Obama can make me fall off the FloppyDrive at a walk. He made Paul fall off, at a walk, in a straight line which is pretty cool by any standards. In other words it is a killer.

It took me a week after getting back on the Saddlechariot to realise I could do everything except gallop diagonally across tractor ruts in comfort, and that I could take it across the tractor ruts if I was prepared to accept a little pain. So I am back being stupid on a vehicle that is totally forgiving, and having fun, and learning ambidextrous chariot archery, all at the same time.

But I need to get Obama back to a slow mooch before I can really enjoy myself. If he is worried by me, it rather takes the fun out. I’ll get there and I’ll keep you posted. I hope to have some video of archery over the next few days.