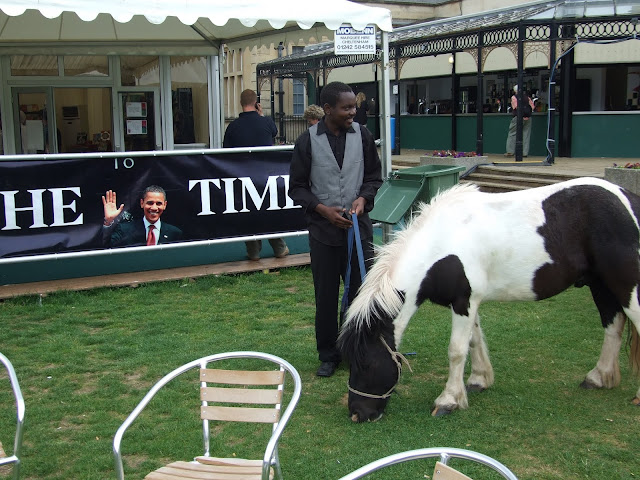 I’ve had my balls cut off, but that doesn’t tell you much, not anybody’s idea of good characterisation, not a rounded personality, and as the guy who is going to be telling you this story, alongside Simon, you need to know a bit about me.

Simon called me Obama, because I am black and white and he says its the least relevant thing about me. Beauty was named for his colour, Darkie, then Black Beauty, then Black Auster, but to humans, colour matters. Simon can’t understand how we describe each other, no human can, even Anna Sewell couldn’t. It’s smell, and sounds, especially the footfall. I can hear through my feet, all horses can. Why do you think our feet are that shape, just like a stethoscope, says Simon, who decided we could hear through our feet after reading research on Elephants ability to hear and communicate via subsonics.

I’ve seen the e-mails from Caitlin O’Connell-Rodwell who did the research work on Elephants, and she seems nice. I wish she could work on horses as well. Nailing lumps of metal to our feet is bad enough, maybe if they thought of it as nailing lumps of metal to our ears, they might stop. But look at the way humans jam bits of metal in their bodies, especially their ears, weird or what. So footfall, can’t tell you much. I’m 120 centimeters ish but Simon doesn’t find it easy to measure me. That’s not his fault. He can’t get a measuring stick near me because I HATE measuring sticks, because I HATE whips.

I have been Pony Clubbed. That defines me in one way. I am used to people who put their children on my back and tell them to kick me. And if that doesn’t work, they give them a stick to hit me, then they test the children to see they can hold a whip in either hand. And after a bit, when the children have shown they can kick and whip, they graduate to metal spikes on their boots so I really notice being kicked.,

Don’t kid yourselves, I notice. You don’t need bloody metal spikes to get my attention. Simon just talks to me and I listen, I don’t say I do what he wants, but I listen, I know what he wants But if you hurt me, I hide the pain..That’s a horse thing, read Temple Grandin, on prey species masking pain. I may not show it, but I feel it, and I remember it.

I watch Simon’s face when horsey girls are around, and I know he gets scared and stroppy, if I wave my bum at them, but they’ve hit me enough, it must be my turn now. So no balls, black and white, hates whips. The first describes nearly half the horses in the UK, black and white isn’t much of a clue and hating whips describes all horses, everywhere, .

OK let’s describe Simon. Nobody’s cut his balls off yet, brown hair with some white and he hates whips. He’s 185 centimetres, I’m 120. That doesn’t mean he’s much bigger just that he rears the whole time. In horses, rearing is a vice. Why?

Weight, he’s 100 kg ish and I’m 230. Apparently someone saw my photo and said I was fat. When they’re not obsessed about colour, they’re obsessed by weight, their weight mostly, but they’ll pontificate on anything, and weight’s just another reason to criticise. And that’s started me on another rant. But first, weight. The photo this person saw, was of me in London. I had pulled 250kg from Exeter to London which isn’t easy. Give Simon credit, he did pull up the worst hills, but pulling quarter of a ton, two hundred plus miles is work, and you get bloody fit. I was eating better than Simon and Lee, because that is the best thing about travelling, some real food, ie each mouthful is different, each day is different. I got to London bloody fit and my bum did look big, because it was sodding muscle. Call me fat. These horsey types are so used to the ponies they have stuffed in a field with nothing to do, they can no longer recognise muscle.

The ponies they are used to stand around bored rigid, which is no way to build muscle. Have you tried standing in a field? Go and do it. And after an hour, say to yourself, only another 23 and I will have done a whole day, 365 of these and I’ll have done a year, and with this level of boredom, I’ll eat myself to death in 2 years. That assumes one isn’t one of the poor sods in solitary. I’ve done a couple of days in solitary when I bruised the sole of my foot, and it is hell. Fields are boring, but stables, they are the pits.

But back to rant. This “eye for a horse” crap humans pride themselves on. It’s just picking faults. They actually think somebody who can notice some tiny imperfection is a good horseman, or woman. Oooh look, he’s lame on that near fore, ooh there’s a lump on that joint, ooh look at that scar on his knee.

I’m too fat, my head is too big, my neck is too short, my legs are too short, my body is too big. No they are not. What you are looking at is ME. Look at any horse book, it is full of faults to pick out, spavins, wind galls, legs set too close together, cow hocks, ewe neck, the ponies with those features are still ponies, don’t they deserve a life? Is this sort of rabid eugenics movement acceptable in the 21st Century?

Now look at the most famous book on people written by a horse. What does Beauty see as faults? Using whips. Find one example where Beauty says the whip helped. Now open your eyes, if you can see a spavin at ten paces, Beauty screams out that whips are bad from beginning to end. And not just whips; bits, blinkers, horseshoes., stables, hunting, cruppers, bearing reins, blisters and docking.

But go back to whips. Read BB with this incredibly perceptive horseman’s eye that can spot a fault at a hundred paces, and find the GOOD things about whips. Then ask why, after 50 million copies have been sold, whips are more prevalent, more vital to humans than they ever were,

A horseman’s eye. Don’t ask me to respect something that is blind to pain, blind to suffering and only good for finding reasons to criticise and exclude. You don’t allow disability discrimination towards people, why do you treat it as a God given skill among horse people? When bigotry becomes praiseworthy, you have serious problems.

And you still don’t know much about me but you are learning. And maybe you will learn a bit about yourself. And maybe, just maybe, you will start to see whips as I see them. A weapon, and I’m on the wrong bloody end.