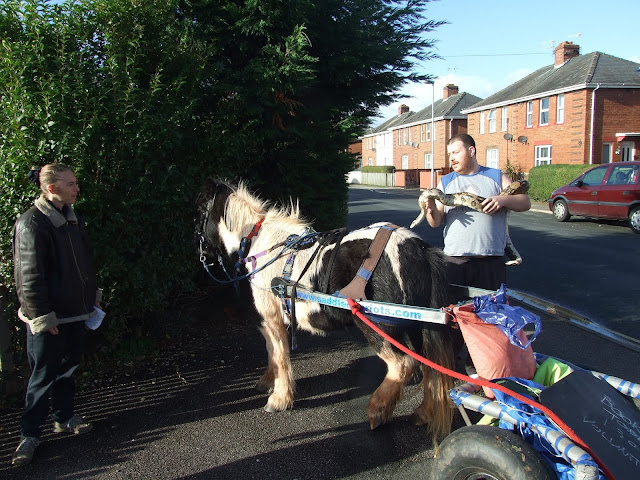 I wish we had a better communication system, between horses I mean. It’s no problem in a field, when there is a group of us, and no interfering humans, but on the road, I can’t communicate to the others I meet. Partly Simon seems to think I’m not allowed to just set off wherever I might wan to go, and more importantly, most of the horses we meet, ie Simon and I when we are out in one of his weirdo vehicles, seem totally terrified of me.

That’s why I want to communicate, to reassure them, that we won’t hurt them. But with someone sitting on top, kicking them, and a lump of metal clogging up their mouths, communication isn’t easy, and of course the big problem is the person on top. I watch them. The minute one of us, a horse I mean, gets startled, or scared, we put our head up, its natural. And we stop, because who wants to walk into trouble, and if it looks scary, we turn round and go the other way because we have brains and that is the sensible reaction.

But these idiots on top, the first thing they do is jab the poor sod in the mouth, kick him in the ribs and hit him with a whip. I watch it. Today a horse came past with a bloke on top, and the horse had never seen me before, and certainly hadn’t seen the iBex, and Simon looks weird at the best of times, but he went past, nervous, but coping, but he was still stressed. Fifty yards further on something worried him, and the guy hit him, and they went along the road for another couple of hundred yards. Flinch, hit, Flinch hit. From stuff I’ve seen up on the Broadband, and comments Simon makes, this is normal. This is what you are meant to do. Luckily Simon is weird and doesn’t.

But you would think the people could see themselves from our point of view.

We see something strange, we raise our head, stop and assess things, lining up a good escape route at the same time. It’s sense. If running is what you do, getting ready to run is vital, and in a narrow lane, if the threat is in front, running forward is silly. So you get ready to turn. But you only do this if you are scared.

So something spooks one of us. We get hit in the mouth, and with a bit, that hurts. The kick and the whip follow fast. So what does a horse learn? that if something new or scary or dangerous appears, we get hit. Mouth sides buttocks. Bit boots and whip. Just pray the shit isn’t wearing spurs. So anything new is going to hurt, anything different is going to hurt.

There’s a magic phrase I learned from Broadband. “Learned helplessness.” It’s got to be the most depressing concept going. If everything you do is wrong, every sign of individuality, every sign you have a brain of your own gets you hit. Flinching gets you hit, stopping gets you hit. Starting when not kicked gets you hit. Not starting when you are kicked gets you hit, too fast too slow, too high, too low, you get hit, that’s how you learn helplessness, and you learn to just go with the flow. Shut your eyes, shut your ears, shut your brain, let the bang in the gums, or the kick in the ribs feed straight through to your legs, do what he says, become and extension of his brain, let him become a parasite, controlling you, your every step, your every move…… You will still get hit, but it becomes random, impersonal, you can’t move to this beat, you just get beaten and ignore it. As you shut down you learn to do what the parasite wants, let his eyes guide you, his brain, think for you and maybe he won’t hurt you as much, but he will hurt you anyway, you have learned that you are helpless.

But it takes time, and skill, of a sort, and courage of a sort, from the human this is, from the parasite, to get you to this learned helplessness. You have to be beaten down into it. Most riders can’t do it, so you get frightened, your head comes up, they bang you in the teeth, you stop, they kick you in the ribs and you turn to safety, they hit you with a whip, and you run for safety. Because you haven’t learned helplessness, you’ve learned that something new means pain, that anything new, you get hit, so you learn to fear the new, and after a few times of spinning and running for safety, your rider gives up, and you get sold to another one, who takes you out into new and scary surroundings, and when you raise your head…………….

So what has this to do with a literary review of one of the most popular works of fiction ever. Well it was never fiction, it was true. Here is Beauty’s new partner, after Rory got the shaft through his chest, talking about his nervousness.

good deal frightened several times, and if I saw anything strange I

used to turn and look at it—you see, with our blinkers one can’t see

always gave me a whipping, which of course made me start on, and did not

make me less afraid. I think if he would have let me just look at things

quietly, and see that there was nothing to hurt me, it would have been

all right, and I should have got used to them. One day an old gentleman

was riding with him, and a large piece of white paper or rag blew across

just on one side of me. I shied and started forward. My master as usual

whipped me smartly, but the old man cried out, ‘You’re wrong! you’re

wrong! You should never whip a horse for shying; he shies because he is

frightened, and you only frighten him more and make the habit worse.’

So I suppose all men don’t do so. I am sure I don’t want to shy for the

sake of it; but how should one know what is dangerous and what is not,

if one is never allowed to get used to anything? I am never afraid of

what I know. Now I was brought up in a park where there were deer; of

course I knew them as well as I did a sheep or a cow, but they are not

common, and I know many sensible horses who are frightened at them, and

I knew what my companion said was true, and I wished that every young

horse had as good masters as Farmer Grey and Squire.

That was written down by Anna Sewell about 140 years ago. 50 million copies of those words have been published. Can’t you human’s read?