Ellen Tinkham School visited Shillingford Organic farm in November 2012, and Obama provided access for those with mobility issues. The vehicle is the iBex. 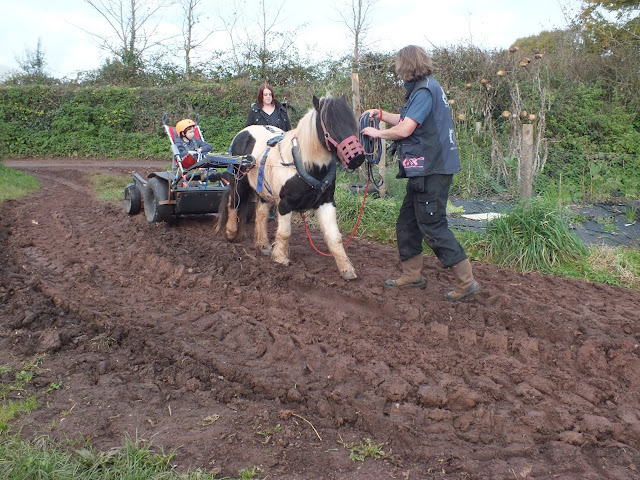 Kevin, of Organic Arts, who was organising the visit, suggested I check out the ground first, so I ambled around in my rigger boots and the mud didn’t come over the top, so I decided it was OK.

I was right, it was fine for anyone used to deep mud, wearing rigger boots. Obama doesn’t like the noise when the iBex converts from wheeled vehicle to sleigh, which happened every time I steered it into another rut. He didn’t do anything, but he clearly wasn’t enjoying it. The helpers, who weren’t expecting that level of mud, weren’t any keener.

But the photos show the system works. 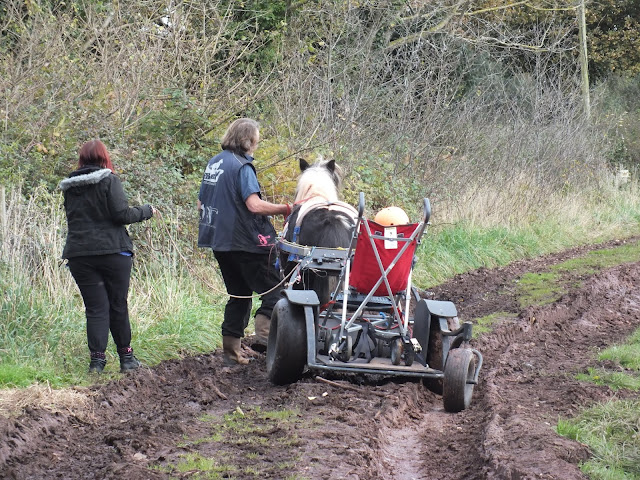 My steering may not be much good, but the system works. Obama looking stroppy at the noise as the vehicle slides along the ruts. 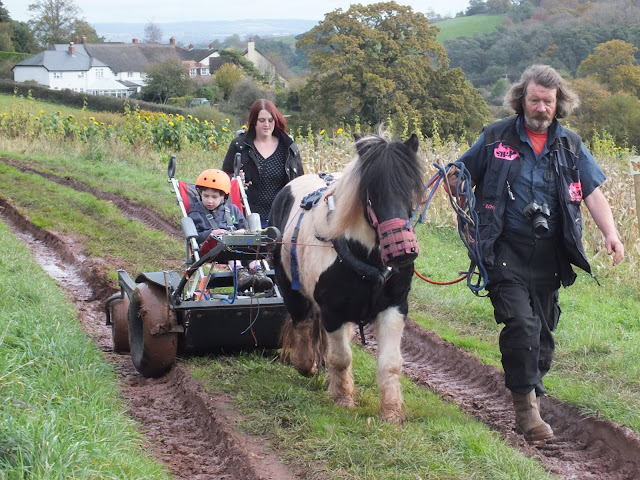 In the photo above, Obama is relaxed and enjoying the view when the wheels are carrying the load. 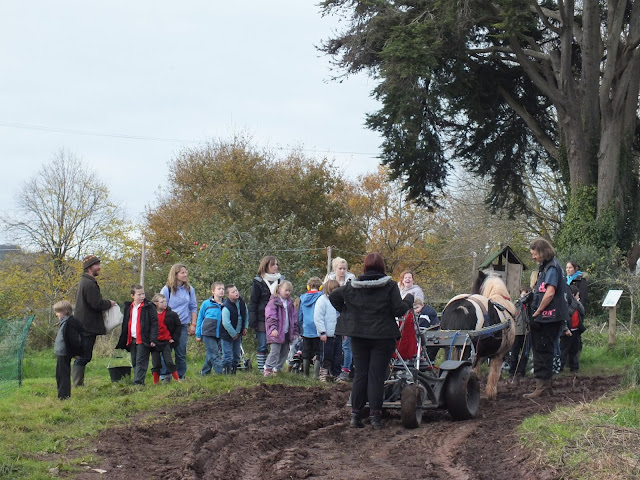 Getting ready to turn round on badly rutted ground with minimal space. 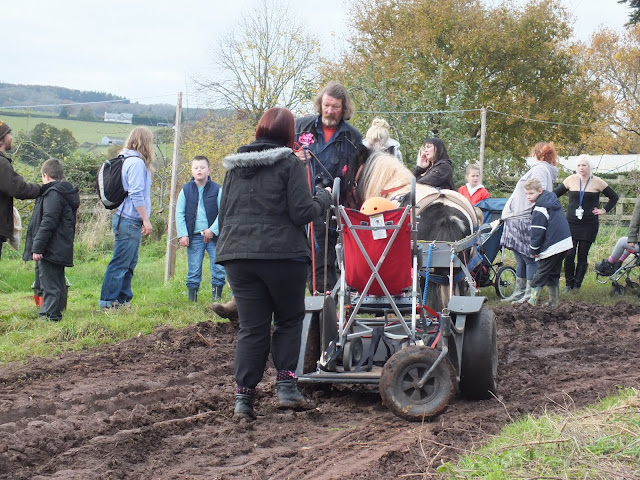 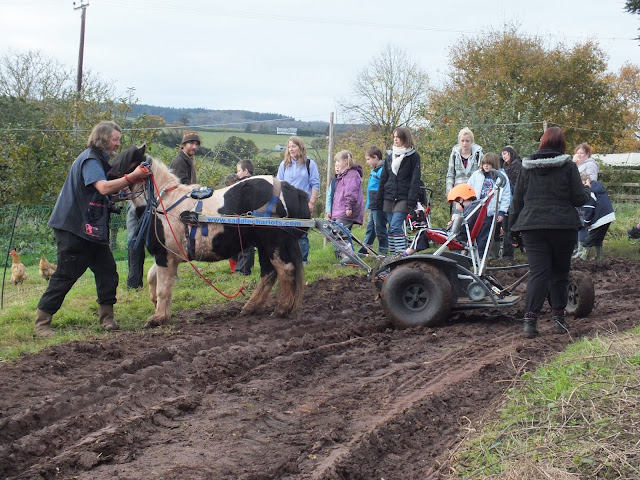 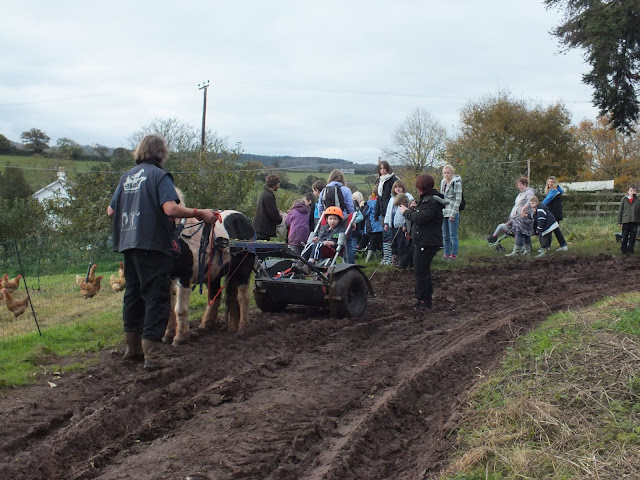 Turn completed and the helper is about to pull release rope she has been holding so patiently. 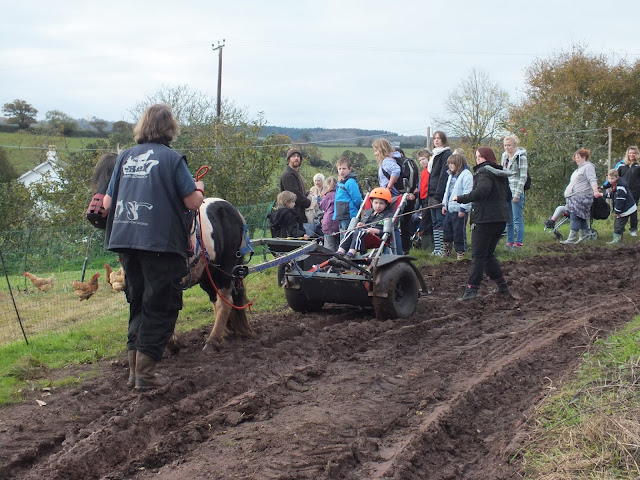 She pulls the rope and the shafts start to drop. 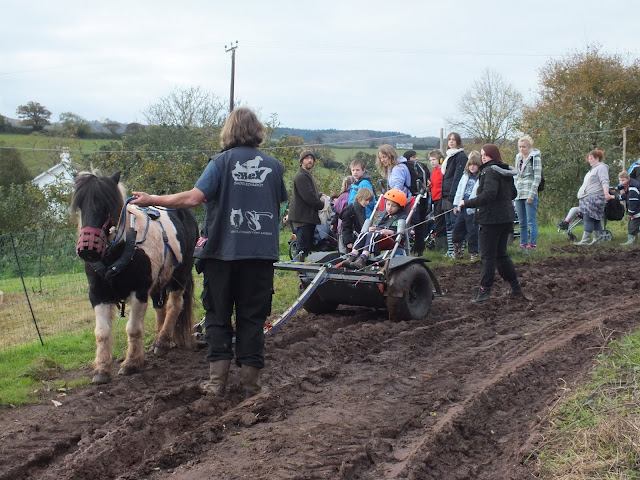 The pony is completely free. The shafts dropping have engaged the brakes. By pulling one rope, Daniel has gone from being in a pony drawn vehicle, with a powerful, unpredictable animal attached, to what is now a piece of garden furniture. Pulling one rope goes from a potentially highly dangerous state, (ie if the pony panics) to a completely safe state.

The training manual is short, to the point and fits on one tweet with 98 characters unused.

If you are worried, pull the release rope. 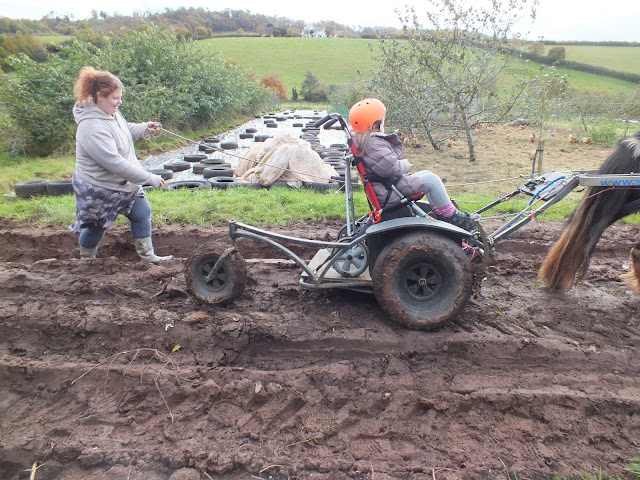 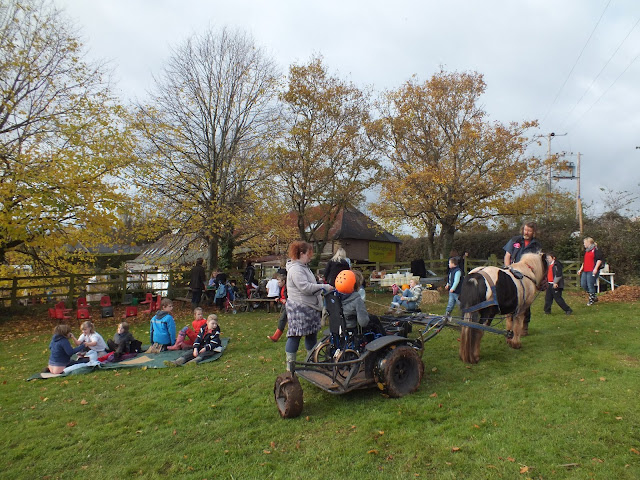 Alfie joining the group for a picnic lunch and pulling the release rope. 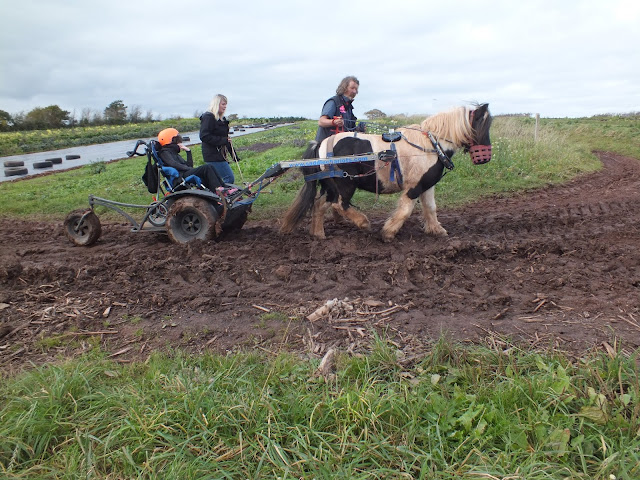 A different route, much easier as we choose whether to go over the ruts. The kids and I think it is fun, so the helpers just have to lump it. 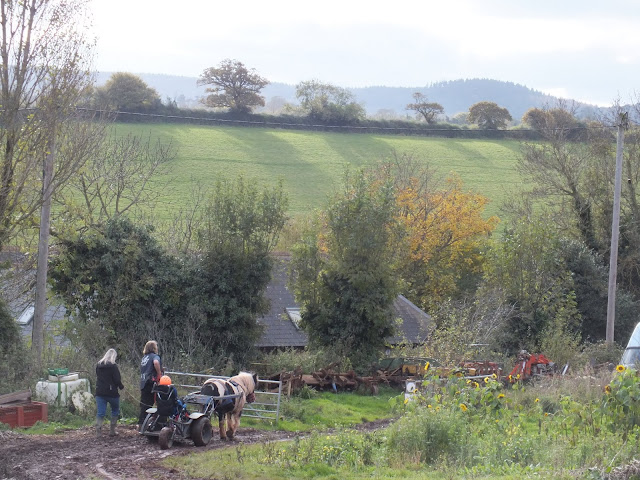 Shillingford Organic Farm is beautiful from any direction. 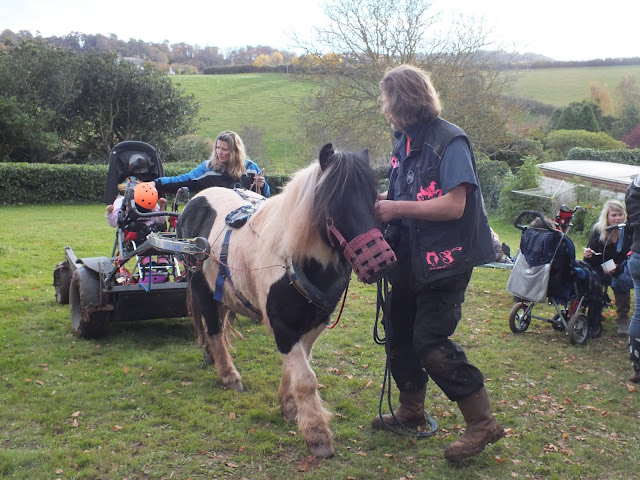 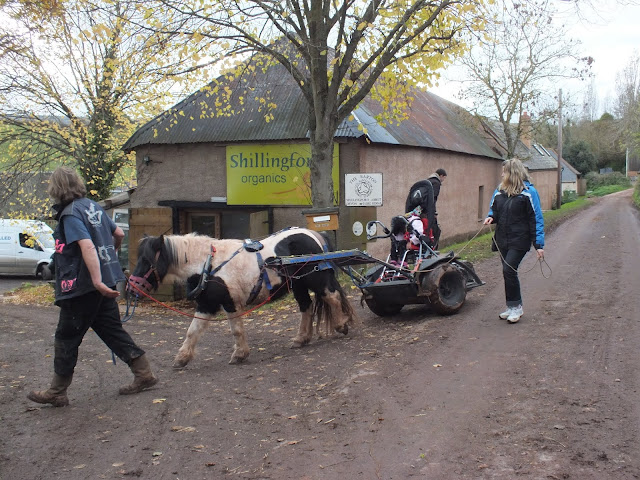 The end of the working day for Obama. Now come the scratches. 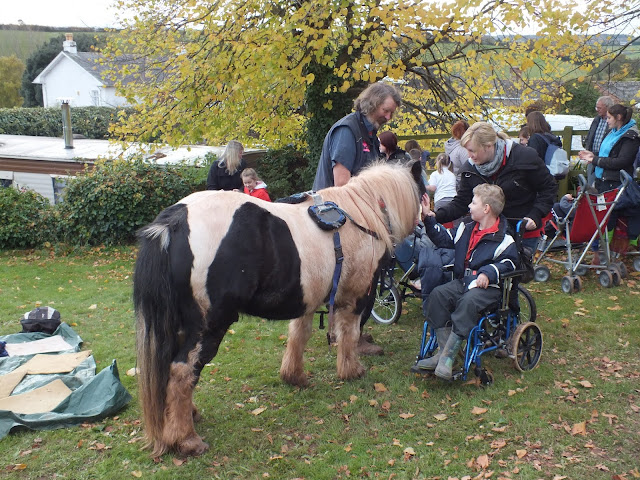 “Come on, you can scratch harder than that.” 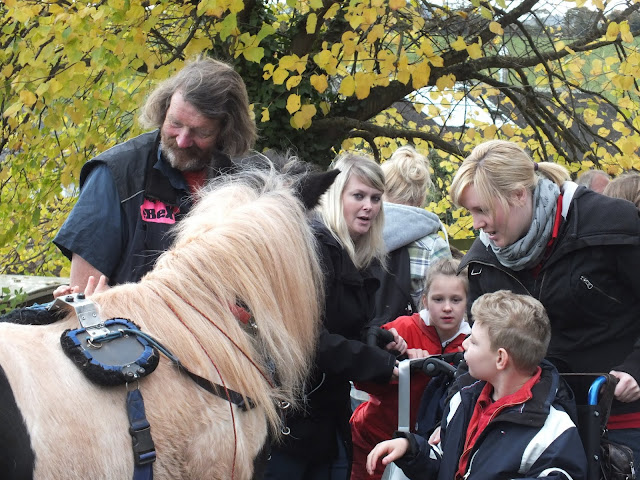 Obama is wearing a grazing muzzle for safety. When nervous he nips, almost always nipping me, to say, “Oi, get me out of here!”  I know his nips aren’t malicious, but that doesn’t mean they don’t hurt.  With a grazing muzzle on, nobody is going to get nipped, which means everyone can enjoy themselves. 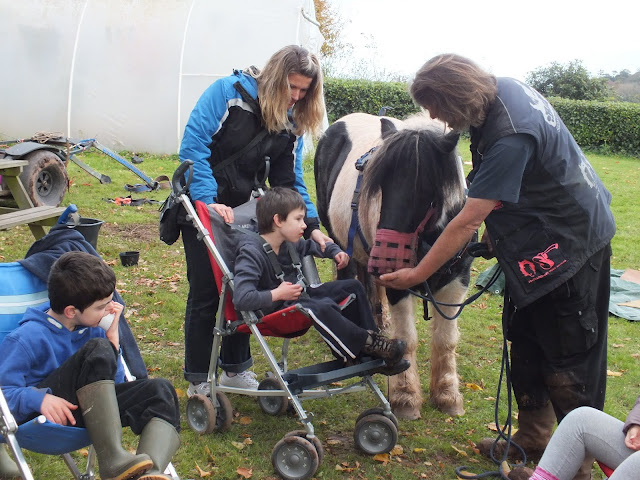 Obama can still eat treats, so he accepts the muzzle. I don’t pretend he likes it, but he accepts it. When he and I are working together without members of the public, he never wears a muzzle and nips when it amuses him. As a professional pony shouter, I shout at him, and he ignores me completely. 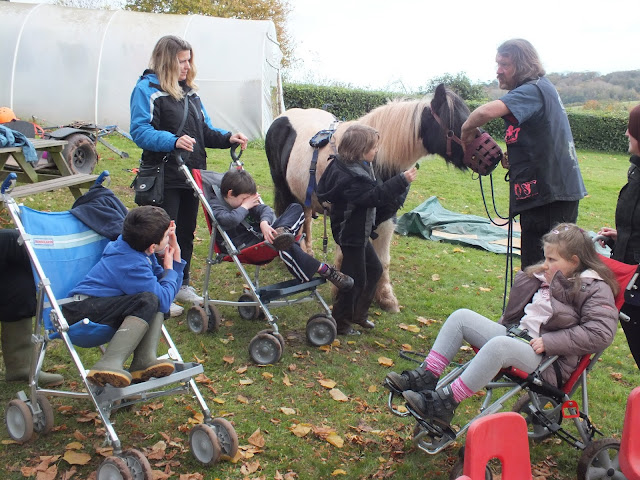 People like ponies, ponies like people. Pony Access brings them together, and the ponies can help the people with mobility which is a massive bonus. It is viable because safety is at the heart of the system. It works because ponies are really cool. 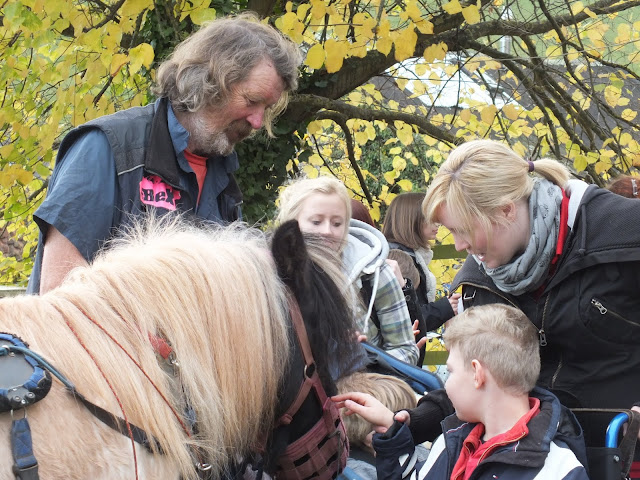