There are two ways of looking at safety. You can sneer at “elf and safety”, and take the “my father broke his neck and it never did him any harm” attitude, or you can see safety as a force for good, liberating us from fear. 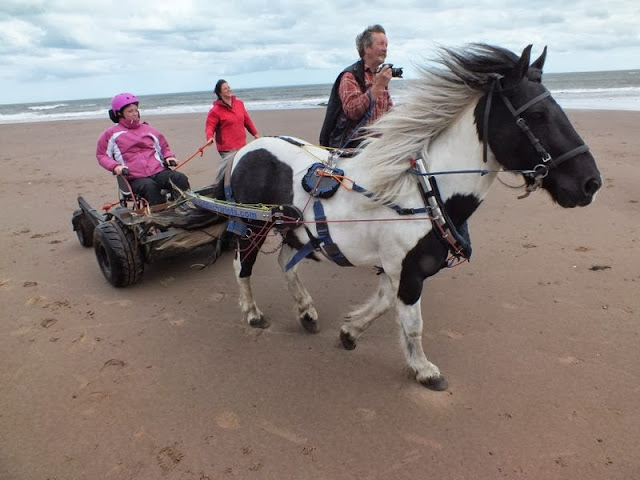 Safety gives Pony Access the freedom to help people. Pony Access can only take children with disabilities round the school playground if it is safe.

Pony Access can only take people with disabilities on the beach, or across Dartmoor, if it is safe.

Safety isn’t an obstacle, it is the gateway to freedom for most people. 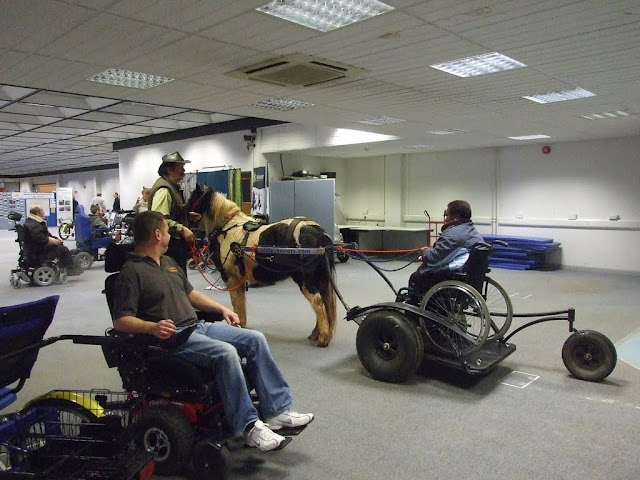 Legal risks are for the few with their own land who can charge around on horses or quad bikes or whatever, at their own risk. For the rest of us, if it isn’t insurable, it isn’t available, legally. Pony Access is fully insured because it is safe.

Safety isn’t total. Skylab may fall on your head, zombies may strike. Pony Access remove the risks associated with what we do, and to do that, we have to look at those risks.

Pony drawn vehicles are safe if they aren’t attached to the pony. They just sit there. Attaching vehicles to the pony creates the problem because ponies run away when they are frightened.This is so common that it has it’s own special word, “bolting”. Dictionary definition,   (of a horse or other animal) Run away suddenly out of control: “the horses bolted”.

Can we train a pony not to bolt? No, nobody can.

Can we stop a pony that wants to bolt? No, nobody can.

Can we release the pony so it can run away safely? Yes. The unique Saddlechariot Instant Pony Release System was designed to do exactly this. This video shows the remote control system releasing the pony.

Pony Access allows ponies to run away to safety.

Other vehicle based risks come from big spoked wheels which can break limbs, narrow solid tyres, ditto, high centre of gravity tipping the vehicle over, turntable trapping limbs etc. The answer to all these is to avoid them and build a vehicle that is modern. Trying to look traditional involves building in all the traditional dangers. The iBex is modern, and safe. The Instant Pony Release System is the most important safety feature. The other features, improved stability, automatic brakes, smooth shape, all increase the number of locations we can work and the types of terrain where we can work.This video shows me testing an early and not very stable iBex on some fairly silly terrain to check that it is safe when used sensibly.

I can do this because, if anything goes wrong, the Instant Pony Release system means I can release the pony.

Releasing the pony, means you have a loose pony. So lets look at the pony side of the safety system.

Ponies run away from danger, to a safe place. But to a pony, a safe place isn’t somewhere it can hide; safety is an open space without people or things, and ideally with grass. A scared pony will run away from people, it won’t attack them, it won’t mug old ladies or steal children’s phones. Obama has never shown the least inclination to do anything useful like that. He runs to open space, he sees no threats. He sees grass, he eats it.
Doing nothing produces safety. Trying to control the pony doesn’t.

Selecting the right pony is essential, but not very difficult. If it kicks, bites, is obviously scared or vicious, don’t use it. This is a personnel issue. Pony Access works with a diverse group of clients, with a diverse range of issues. The Personnel department have to select people and ponies who can be trained reasonably easily to deal with the clients.

One person might be perfect working with recently disabled young army veterans, but not so good with young children. Aggressive bullies, pony or people, are not suitable for either group, so don’t employ them.

Horse yard Risk Assessments frequently point out that one of the risks of horses is that they are large heavy animals. Pony Access use the smallest, lightest animals that are up to the job. It is why we are called Pony Access, not Shire Horse Access.

We pick, nice, small ponies, but this provides no guarantees. A pony in the iBex cannot kick or bite the driver, or harm the driver in any way. If they are scared we let them run away.

If people want to interact with ponies, we use the same principle. Ponies are worked where they feel safe, where they have somewhere to run to.

Beginners, clients or staff use a lead rope with a breakaway section. If the pony panics, it can go elsewhere to panic.

The rules are simple.

Leave the pony an escape route.

Nobody is allowed to deliberately frighten a pony. (Anyone can make a mistake and do something that frightens a pony. Repeating that action, knowing it frightens the pony is banned.)
With these basic rules, interactions between ponies and people are safe. With very vulnerable groups, a grazing muzzle for the pony means you know nobody will get bitten.

The job of Personnel Officer is continuous. Pony behaviour must be monitored to ensure the pony is getting bored, over worked, bullied, or for any reason becoming less happy, and consequently, a risk. With variety, and lots of different jobs, ponies are a pleasure to work with.

To find out how we do all this, go to How we do it.

To find out where we can do it, look at Wheelchair Access