Twas the day before Christmas and Obama went to see Exeter Cathedral. Simon wanted him to go down the steps because this is good practice, at least Simon thinks it is good practice. Obama is less convinced, but apparently Cathedral Steps are very special steps and a Cathedral minion came out to kick Obama off.

The guff the minion is talking about the steps being damaged by a vehicle weighing 35kgs with a 110kg bloke on top, running on two 16×6.50×8 tyres inflated to under 10psi is nonsense. The minion in the video was off to report me to the Police when I left. I look forward to the charge sheet, and will be calling in  on the Cathedral regularly to find out how the case is progressing. 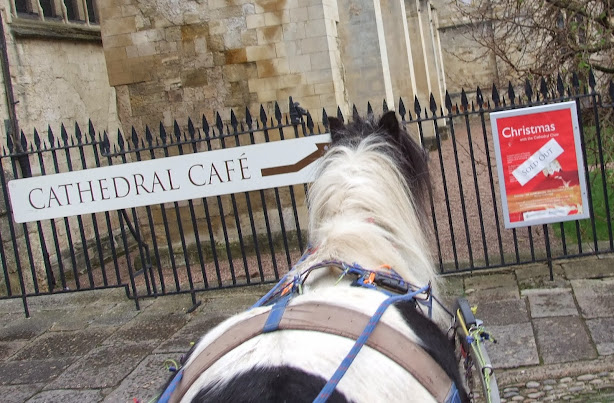 An honest appraisal of Cathedral policy. Christmas is definitely Sold Out

The first time Obama was thrown out of Exeter Cathedral Green was when Obama and Simon were chatting to a homeless guy and a disabled lady, only a few yards from the steps. They were told then that they were disrespecting the graves.

This will probably come as a surprise to most Exeter residents who don’t know the Cathedral Green is a graveyard. They also don’t know these graves require a very special type of respect. One small pony and a disabled lady and a homeless bloke is disrespect. A block of Portaloos for the convenience of shoppers at the Christmas Fayre, in exactly the position that Obama was disrespecting the graves, are presumably spreading sacred shit and taking the sacred piss rather than disrespecting. It is important to understand the respect that placing Portaloos next to the war memorial shows.

The next time Obama was kicked off was Good Friday. 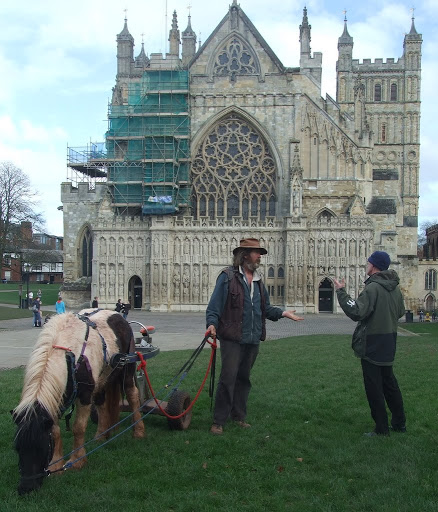 But he was talking to a girl with dreadlocks, 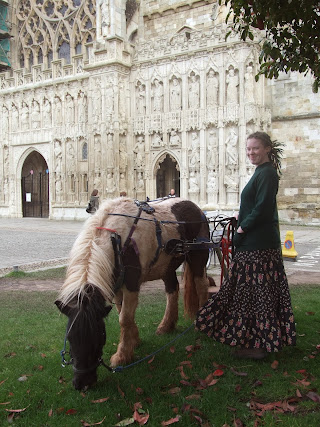 so the Cathedral minions were within their rights to throw him off. This time the reason given was “because we can”.

I decided to photograph the guy throwing us off and he informed me he was just obeying orders. Great defence, worked like a charm at Nuremburg.

Next, Obama and I decided to deliver some vegetables to the Occupy Exeter camp, 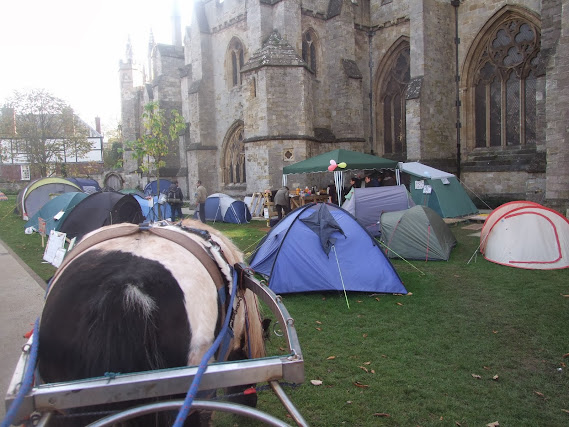 and this time the Cathedral sent out a very junior bloke in a boiler suit to throw us off. So we went quietly because this guy felt enough of a fool kicking off one small pony when there were twenty tents on the Cathedral Green.

Next time was a failure for the Cathedral minions. Obama was just outside the Cathedral with a very large and boisterous Rottweilerish dog running around, and under Obama, making a noise and generally being annoying. Predictably a Cathedral minion appeared and started in at me, “What’s that dog doing?”  he shouted at me.

Personally I thought it was rather obvious that it was being a pain in the backside, but I didn’t say this. I just pointed out that the dog was nothing to do with me, nothing to do with the pony and that he was going to look particularly silly in front of witnesses, having a go at me about a pony because the dog gambit had failed. He retreated, looking deeply un Christian.

Having failed to throw me off for an out of control dog, he made absolutely no effort to find out who did own the dog or do anything about it. The dog was just an excuse to get rid of Obama.

And then Christmas Eve. Don’t I remember some story about a heavily pregnant woman on a donkey, and nobody having any room for her. Well I just want to warn her, don’t bring the donkey to Exeter, it will be disrespecting the graves and your feet won’t touch the ground before the minions get you and anyone like you off the hallowed ground. 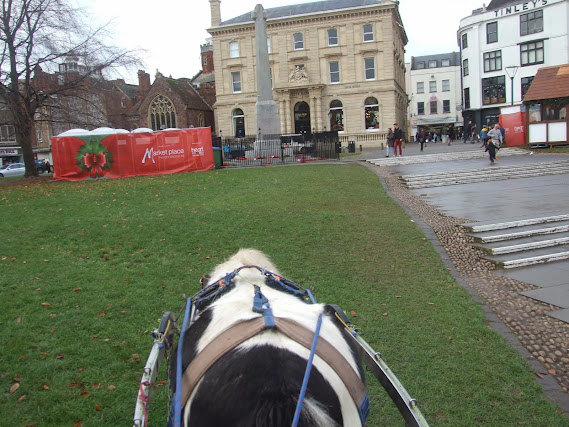 They have to keep it clear of riffraff, they need somewhere to put the Portaloos.

1 Response to Xmas for Obama.