Pony Access is definitely an accident. Thirteen years ago I decided to build a safe, one man, vehicle so I could exercise my children’s pony. By 2013 that has turned into the iBex, the only safe, wheelchair enabled, all terrain, pony drawn vehicle in the world, and Pony Access, an organisation to use the iBex to make ponies part of people’s lives again. 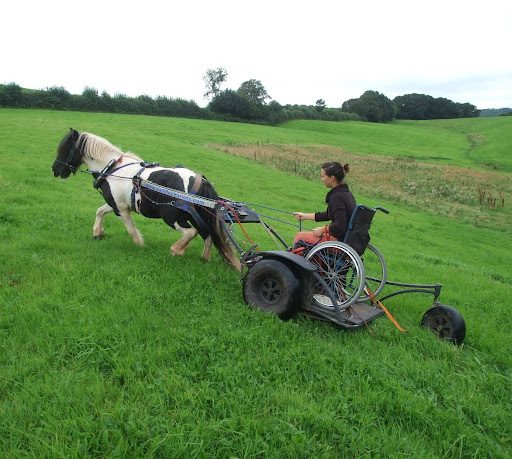 The iBex is odd; the standard vehicle is driven from a wheelchair. It can be modified with a seat to take people who don’t have a seat available at all times but this is a concession to the seatless, rather than the other way round. But it defines the design philosophy. My first vehicle, the Saddlechariot had enormous potential for people with disabilities and I modified and changed and improved, but it was always a compromise. It had one vital and unique feature which makes everything else possible, an instant pony release system.

In 2009 I started building the forerunner of the iBex, known as the Bannedwaggon, a three wheeler with an offset fully castering rear wheel and the lowest floor possible. It had potential, and I was mucking around at the same time designing a pony powered row crop cultivation system, as you do, and suddenly, one day, I got the row crop system to work properly and realised that the Bannedwaggon would now work. 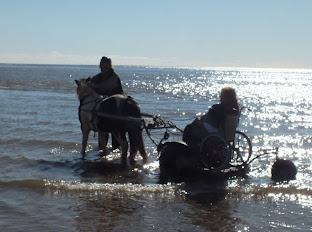 Needing a suitable test drive, I decided to drive round Hyde Park, London, in a wheelchair, pony powered, on my own. As I was broke, and in Devon, the only way to get there was to drive. The saga is described here,  but I can assure you, there are quicker ways to London. Not as educational, but quicker. Without the instant pony release system, Obama, the pony, and I would have been dead. Over and over the safety system saved us from catastrophe.

I drove Obama, the pony, from a wheelchair, round Hyde Park, on my own, with no support team, and when I got back to Exeter, Organic Arts found the funding to launch the Pony Access project. It was at this stage that the Bannedwaggon became the iBex. Needing a crash test dummy, I found Bex, who along with an infectious grin, has Friedrich’s ataxia and a determination to try anything. On her first trip round West Town Farm I had checked the vehicle, the instant release system and the straps to attach her wheelchair to the vehicle, but somehoiw I put the strap through the front wheels, and then back out again. Up the first hill, Bex’s wheelchair tips over backwards. I pull the realease and rush over to help. 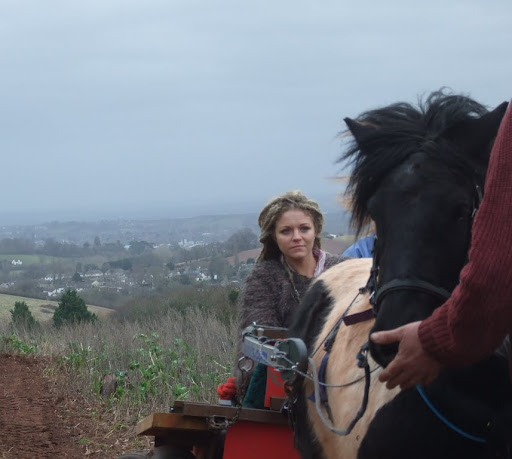 Bex is fine and we get her back into the barn, everyone checking she is OK when she says, “When are we going round the farm.” So I called it the iBex. And the wheelchair tie down system now works. Since then I have redesigned just about everything, the chassis and steel work is now made by a really brilliant blacksmith, the bodywork is neat, and I have added a remote control pony release system to be flash.

But Pony Access isn’t just about vehicles, or wheelchairs. It is about ponies and access. On an earlier journey I drove Obama from Brecon to Birmingham and spent 3 days at the St Paul’s Trust inner city farm in Balsall Heath. It was to visit Birmingham that I got Obama as a scared rescue reject in Novemebr 2009. I drove him to Birmingham in June 2009 and intended to let the kids work with him. To do this I had to design a training system.

Obama was used to the whips and other nonsense of the Pony Club, and totally phobic about it. So I came up with my “no weapons” training theory. I couldn’t say to kids, I can use whips, and hit him, but you can’t, because they would say “Why?” and I couldn’t answer that one. 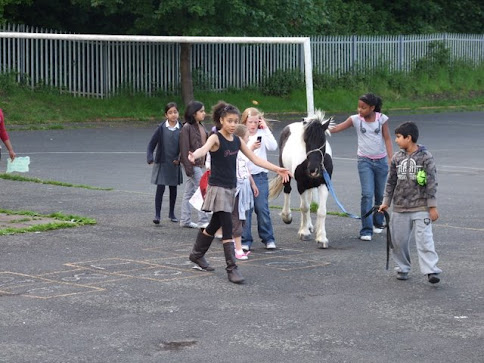 I found I had a pony, Obama, a training system, “no weapons” and when the iBex was right, I had Pony Access. Access with Ponies, Access to Ponies, no discrimination, ability, disability; Obama doesn’t care, I don’t care, and the iBex has to be modified for people who DON’T have wheelchairs.

We work at special needs schools and Obama excels himself. He gives rides for those who want them in the iBex, he interacts with anyone who is prepared to be nice to him, and if someone wants to be nasty, Obama can run away. Pony Access is simple, safe, fun, but above all, it is about access.